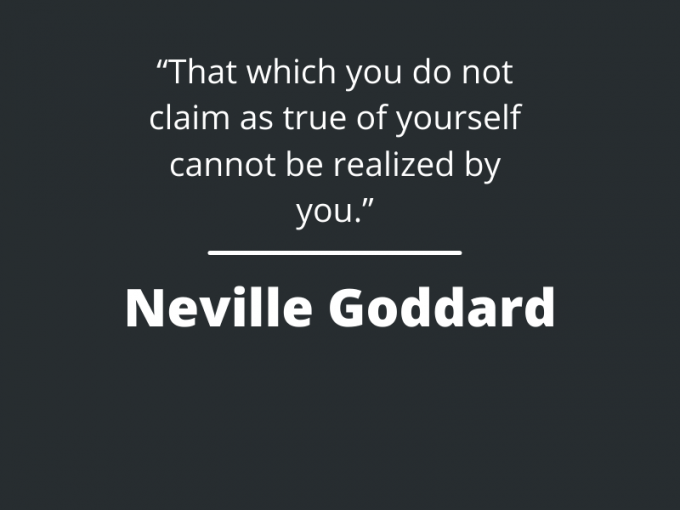 “To be conscious of being poor while praying for riches is to be rewarded with that which you are conscious of being, namely, poverty. Prayers to be successful must be claimed and appropriated. Assume the positive consciousness of the thing desired.”

“Anything can be created by mere assumption.”

“The world is yourself pushed out. Ask yourself what you want and give it to yourself! Do not question how it will come about. Just go your way knowing the the evidence of what you have done must appear, and it will.”

“That which you do not claim as true of yourself cannot be realized by you.”

“Man must learn to believe in that which he does not, at the moment, see in order to grant himself that which he desires to have. Man’s prayers are always answered, for he always receives that which he believes. The law that governs prayer is impersonal. Belief is the condition necessary to realize the desire. No amount of pleas or ritual will bring about the fulfillment of your desires other than the belief that you are or have that which you want.”

“The ideal you seek and hope to attain will not manifest itself, will not be realized by you, until you have imagined that you are already that ideal.”

“All you can possibly need or desire is already yours. Call your desires into being by imagining and feeling your wish fulfilled.”

“Your opinion of yourself is your most important viewpoint. You are definitely greater than you think you are.”

“Change your conception of yourself and you will automatically change the world in which you live. Do not try to change people; they are only messengers telling you who you are. Revalue yourself and they will confirm the change.”

“Your wonderful human imagination is God.”

“Through your ability to think and feel, you have dominion over all creation.”

“You are already that which you want to be, and your refusal to believe this is the only reason you do not see it.”

“Truth depends upon the intensity of the imagination, not upon external facts.”

“I say to everyone: the whole vast world is now in your human imagination, and you can bring any desire out of it by believing it into being.”

“Capture the feeling associated with your realized wish by assuming the feeling that would be yours were you already in possession of the thing you desire, and your wish will objectify itself.”

“Nothing comes from without. All things come from within.”

“The depth of your own being has ways and means that you, the conscious surface being, know not of. It knows exactly how to do it. Don’t ask how it’s going to be done. Catch the mood of the wish fulfilled. What would the feeling be like if it were true?”

“Prove to yourself that you are God by feeling your desire now an accomplished fact.”

“Man moves in a world that is nothing more or less than his consciousness objectified.”

“Each person is born with an infinite power, against which no earthly force is of the slightest significance.”

“Simply dare to assume you are what you want to be and you will compel everyone to play their part.”

“All you can possibly need or desire is already yours. Call your desires into being by imagining and feeling your wish fulfilled.”

“If you will assume your desire and live there as though it were, no power on  earth can stop it from becoming fact.”

“If you judge after appearances, you will continue to be enslaved by the evidence of your senses.”

“With your desire defined, quietly go within and shut the door behind you. Lose yourself in your desire; feel yourself to be one with it; remain in fixation until you have absorbed the life and name by claiming and feeling yourself to be and to have that which you desired. When you emerge from the hour of prayer you must do so conscious of being and possessing that which you heretofore desired.”

“Most of us are totally unaware that our inner conversations are the causes of the circumstances of our life.”

“You change your future best when you are in control of your thoughts while in a state akin to sleep.”

“Don’t condemn yourself for the state into which you have fallen. If you don’t like it, move into another.”

“Truth depends upon the intensity of imagination, not upon facts.”

“Man’s chief delusion is his conviction that there are causes other than his own state of consciousness.”

“For life makes no mistakes and always gives man that which man first gives himself.”

“Imagination is the beginning of creation. You imagine what you desire, and then you believe it to be true. Every dream could be realized by those self-disciplined enough to believe it.”

“Change your conception of yourself and you will automatically change the world in which you live. Do not try to change people; they are only messengers telling you who you are. Revalue yourself and they will confirm the change.”

“Capture the feeling associated with your realized wish by assuming the feeling that would be yours were always in possession of the thing you desire and your wish will objectify itself.”

“The world is a mirror, forever reflecting what you are doing, within yourself.”

“Predetermine what you want to hear and listen until you hear it.”

“Do not waste one moment in regret, for to think feelingly of the mistakes of the past is to re-infect yourself.”

“You rise to a higher level of consciousness by taking your attention away from your present limitations and placing it upon that which you desire to be.”

“Become aware of what you are thinking and you will recognize a law between your mood and your surrounding circumstances.”

“The world is a mirror, forever reflecting what you are doing, within yourself.”

“The law operates by faith. If you believe, no effort is necessary to see the fulfillment of your every desire.”

“Believe your prayers are already realized.”

“You are already that which you want to be, and your refusal to believe this is the only reason you do not see it.”

“Feeling is the secret.”

“It is necessary to have an aim in life. Without an aim we drift.”

“Be careful of your moods and feelings, for there is an unbroken connection between your feelings and your visible world.”

“Do believe that you are what you want to be.”

“The sensation which dominates the mind of man as he falls asleep, though false, will harden into fact.”

“What do you do after you plan the seed? You leave it. You don’t dig it up every morning to see if it has a root, you leave it.”

“Imagination and faith are the secrets of creation.”

This website uses cookies to improve your experience while you navigate through the website. Out of these, the cookies that are categorized as necessary are stored on your browser as they are essential for the working of basic functionalities of the website. We also use third-party cookies that help us analyze and understand how you use this website. These cookies will be stored in your browser only with your consent. You also have the option to opt-out of these cookies. But opting out of some of these cookies may affect your browsing experience.
Necessary Always Enabled

Any cookies that may not be particularly necessary for the website to function and is used specifically to collect user personal data via analytics, ads, other embedded contents are termed as non-necessary cookies. It is mandatory to procure user consent prior to running these cookies on your website.